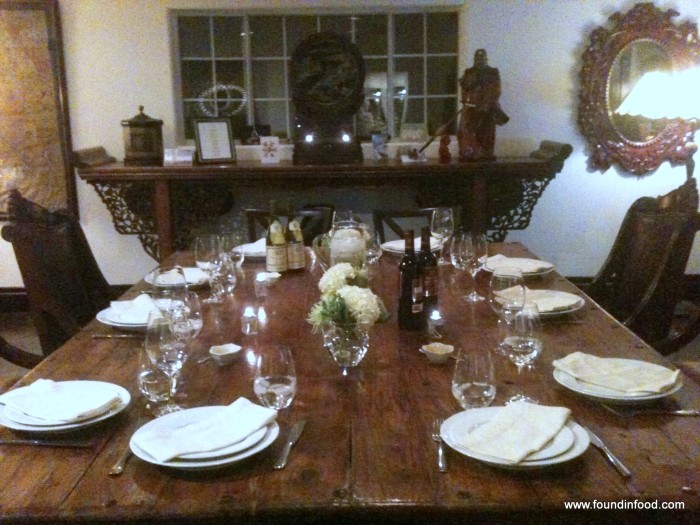 The Beef Wellington. This traditional English preparation of beef fillet coated with paté topped with duxelles and wrapped in buttery pastry has been the centerpiece of my family’s Christmas dinner for at least 12 years. I am not certain of the circumstances that made my father decide one Christmas that he was going to make Beef Wellington and that he was going to do it 100% from scratch. “Oh don’t be silly” was his customary response to a suggestion that store bought pastry may save him a bit of time and heart ache. The result was that he was completely obsessed for weeks before Christmas. This obsession naturally radiated to my two sisters and I, as we were summoned yearly to assist with the preparations, creating a general state of fervor and anticipation.

Although its origins are unclear my father firmly believed that he and Beef Wellington hailed from the same place – England. The story that my father told each year was that the regal dish was created by an admiring chef to pay tribute to The First Duke of Wellington, Arthur Wellesley who defeated Napolean at the Battle of Waterloo in 1815. Other accounts suggest that it’s a nod to the town of Wellington in New Zealand or is actually of French origin, adapted by a patriotic chef during the Napoleonic Wars.  A final theory mentions that it was named for its resemblance to a highly polished riding boot known as a wellington boot.

The process of making Beef Wellington started in early December with the pastry. He insisted that in order for the pastry to achieve the optimal flaky buttery-ness it must only consist of flour and butter. No eggs, no water, no oil. The result was an extremely difficult pastry to work with – it was so flaky that it often fell apart as we attempted to drape it over the beef. But my father, always being well prepared, made balls and balls of pastry, enough to cover the inevitable mishaps. During this time there was little room in the fridge for anything else – the shelves neatly lined with balls of pastry wrapped in cellophane.

The week before Christmas the fridge was stocked with the essentials of Beef Wellington:

The day of the feast, my sisters and I dutifully arrived in my father’s kitchen ready to be put to work. We were usually greeted by a smiling Pater, as we called him.

“Good morning Cherubs” he beamed affectionately as he planted a kiss on each of our cheeks.

“Fancy seeing you lot. I don’t think there’s much left to be done. I’ve been slaving away all morning,” he taunted.

By this time, which was somewhere around noon, he usually had a glass of wine in hand. He stood supremely over the stove, massaging the buttery shallot mixture with a wooden spoon as he assigned tasks.  Fortunately the purchase of the food processor a few years before had eliminated the regretful job of finely chopping three hundred mushrooms. So the tasks included washing and processing the mushrooms, rolling out the pastry, seasoning and searing the beef and setting the table.

This time spent with my sisters and father was delectable. It was the reason I never missed a Christmas with my family. No matter where I was in the world I always made it home for this comedic process of the imperfect Beef Wellington. As we prepped and drank wine there was a lot of laughing and problem solving and creativity. Like the recurring debate of whether to wrap the whole tenderloin and then slice to serve or conversely slice the tenderloin into individual portions before wrapping and baking.  Never able to settle on which method was better we continued to alternate year to year. Or the time my artistic sisters molded certain parts of the human anatomy onto my mother’s individual Beef Wellington. The exclamation my mother let out as we set the artful dish in front of her shall not be repeated here.

The funny thing is that although we had been making this dish as a family for the last 12 years I don’t think we ever got it just right. I mean absolutely perfect so that we felt we had mastered the art of the Beef Wellington. It was something different each year; the beef was overdone, the pastry was underdone or burnt or not flaky enough or the whole contraption fell completely apart when we tried to serve it. When dinner was served and we were all sitting, my father collapsed into his chair at the head of the table in a huff and proclaimed “Bloody Beef Wellington! NEVER again!”

Despite the imperfections it was delicious year after year. The imperfections drew us back to the kitchen each year, to give it another shot, to laugh and tell stories. To paraphrase M.F.K. Fisher, we were collectively filled with the pleasant emotion of knowing that we had concocted a formidable dish to nourish and sustain our beloved few against the hungers of the world.

The culmination of our efforts was a veritable feast, an occasion to share and give food, love and security. And we were triumphant, not because we had conquered the Beef Wellington but because we knew that the following year we would gather again to plot a new strategy, lubricated by wine and stories. This intimate, family tradition of clumsily preparing a forever imperfect Beef Wellington was what made the meal, however it turned out, forever delicious.

My father passed away last year and it was just too painful to think about Beef Wellington sans my father. But with the passage of a year, I think I’m ready to take the reins in the continuation of this family tradition, lubricated by wine and stories and memories of my father.

To make the duxelles saute the shallots and onions in a generous pat of butter until soft and translucent. After processing the mushrooms to a fine chop add them to the shallot mixture and continue to cook until tender and the water has cooked off, at least 45 minutes. When finished remove from heat and set aside.

Let the fillets cool before slicing into 1 inch pieces to serve. Do not stress out if they fall apart when you serve them – as long as all the component parts are on one plate it will taste fantastic.