Adventures of Eating Vegan on the Road

“I’m really looking forward to my Shrimp and Grits,” I said to David as I popped another fried pickle into my mouth. Charlie gazed on from underneath the table, smiling and panting, trying to keep cool. The town was Charleston, SC and the watering hole was the Blind Tiger Pub. We were on a mini Southern road trip that had taken us through Savannah and Charleston before heading back to Atlanta, where we were staying with David’s family.

As part of the Transitioning to a Vegetarian Lifestyle Series I thought I’d share our adventures of eating vegan (or mostly vegan…or maybe somewhat vegan) in the South.  Whether you’re traveling for work or pleasure it always proves challenging to avoid processed and fast food and get enough veggies. And often you’ll want to try the local specialties, just like I decided I couldn’t take a trip to the South without tasting Shrimp and Grits. Finding that balance between eating well and enjoying what you eat is attainable! Focus on getting fruits and veggies wherever possible – even when you choose a dish that’s not completely vegan think about modifying it to minimize the animal protein and maximize your veggie intake.

Take our dinner at Belford’s in Savannah for example. The Belford’s Award Winning Crab Cakes with grilled jalapeño lime aioli, spiced tomato jam, red rice and julienned vegetables caught my eye and the waiter confirmed that the crab cakes were indeed worthy of many awards. He also assured me that they were made with real, locally caught crab. So I decided to go for it with a few modifications. I asked for only one crab cake, substituting an extra helping of the vegetables and replacing the red rice (which is made with sausage) with a side of spinach. David was eyeing a polenta dish made with lots of vegetables and lots of cheese. We asked the waiter to consult with the chef to see if it could be made without the cheese. When the answer came back in the affirmative, David was good to go and the result was delicious. 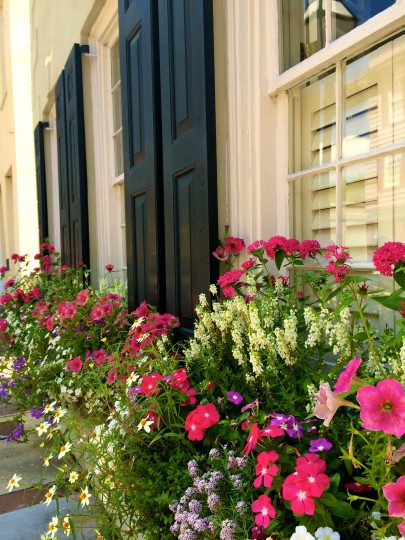 For breakfasts we stuck to oatmeal with fruit and nuts. For lunches on the road we were able to find a supermarket deli or a chain like Panera Bread to get a veggie wrap or sandwich. The website happycow.net really helps to find veg friendly food options nearby. By making an effort to eat most of our meals vegan we felt we could splurge a little, which brings me to the Shrimp and Grits I decided I must try.

If I was going to eat this classic Southern dish I was going to make sure it was the best Shrimp and Grits I could find. So I did lots of research (not unusual for me as I spend a lot of time reading about food and restaurants) and found The Hominy Grill in Charleston. I selected this place because 1.) the reviews of the Shrimp and Grits were extremely positive and 2.) they offered a Hominy Grill Vegetable Plate which came with your choice of four vegetable sides and cornbread. So we had one order of the Shrimp and Grits and one Vegetable Plate with collard greens, applesauce, pickled cucumbers and onions and mashed sweet potato. The Hominy Grill was fantastic; we got lots of veggies and splurged a little too. 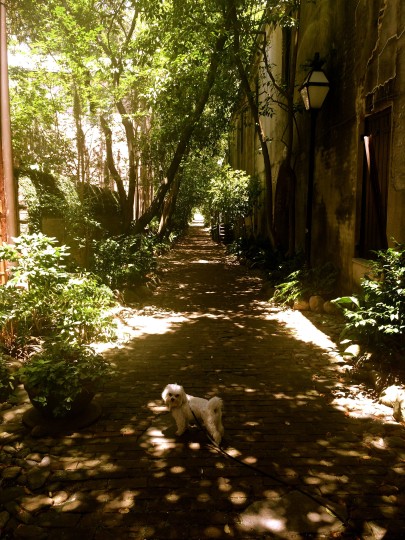 1. It’s not as difficult as you may think to find veg friendly options while on the road. It just may take a bit of forethought. Use happycow.net to scope out markets and restaurants along your route.

2. Do not be afraid to request substitutions. I have never had a bad experience when doing so. In fact waitstaff is generally happy to help and make suggestions to help you get what you want. Recognition of their help accompanied by some self deprecating humor about how high maintenance you are goes a long way to ingratiate yourself.

3. It’s easier and more fun to be 95% vegan. Make an effort to eat vegan for the majority of your meals. If there’s something specific you want to try (like Shrimp and Grits) identify that thing and scope it out. Avoid the “I’m on vacation so I’m going to eat whatever I want” rationalization. Instead reward yourself once or twice but stay focused on eating vegan.